Total crypto market cap lost $6.8 billion to its value since Monday, November 11 and now stands at $239.6 billion. Top ten coins are mostly in red for the last 24 hours with Bitcoin Cash (BCH) and Bitcoin SV (BSV) loosing 3 and 3.8 percent respectively. At the time of writing bitcoin (BTC) is trading at $8,675 on the Bitstamp daily chart, while ether (ETH) stands at $185 and Ripple’s XRP moved down to $0.269.

The most popular cryptocurrency opened trading on Monday, November 11 with a huge red candle on the daily chart after bulls were once again rejected around the above-mentioned critical level. The BTC/USD pair erased 3.5 percent of its value and stopped at $8,718.

It entered a downtrend on November 4 and we were already looking at the 50% Fibonacci ($8,465) as the next support zone.

Bulls returned to losing ways in the mid-week session on November 13 when BTC dropped further to $8,749.

The derivatives, options and futures exchange CME Group announced on November 12 it will start offering options trading based on its bitcoin futures. The planned date for the launch is January 13, 2020, as the company is still expecting regulatory approval to continue. As per the official press release, the new product has a lot of advantages including better diversification and additional choices when managing risk and building strategies.

CME’s competitor, Bakkt is already one step ahead and will launch options contracts for BTC futures on December 9.

The Ethereum Project token ETH followed the general crypto market trend on Sunday, November 10 and drew a big green candle to $189 adding 2.4 percent to its value. Additionally, it ended the week with a 4.4 percent increase. 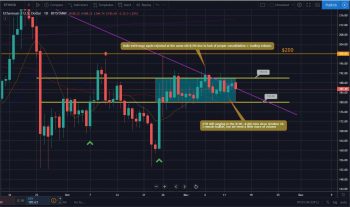 The ETH/USD pair started the new trading period on Monday, November 11 by forming the exact same candle on the daily chart, but in the opposite direction. It fell back down to $184 and erased 2.6 percent. Bulls were rejected around the same old $190 resistance, which once again proofed to be a tough one to break in the current conditions.

On Tuesday, November 12, the major altcoin moved up to $186.5. This was followed by a second consecutive green candle on Wednesday, November 13 when the ETH made another step up, this time to $187.9.

As previously mentioned, we cannot expect big moves from the coin unless it consolidates and escapes from the $180-$190 range. The decreasing trading volumes (around $7-$8 billion on a 24h basis) suggest the lack of steam in the real short-term.