Bitcoin price (BTC) slid to a new low this month, after crashing below the $8K support level. The largest coin is trading at around $7,300 today and altcoins are also been dwindling at a fast pace. The broader market selloff has snatched $150 billion out of the cryptocurrency market in the last two weeks alone.

Tom Lee again blamed lack of regulatory clarity for the huge selloff. The market pundits, however, are thinking about how low bitcoin price value can go. 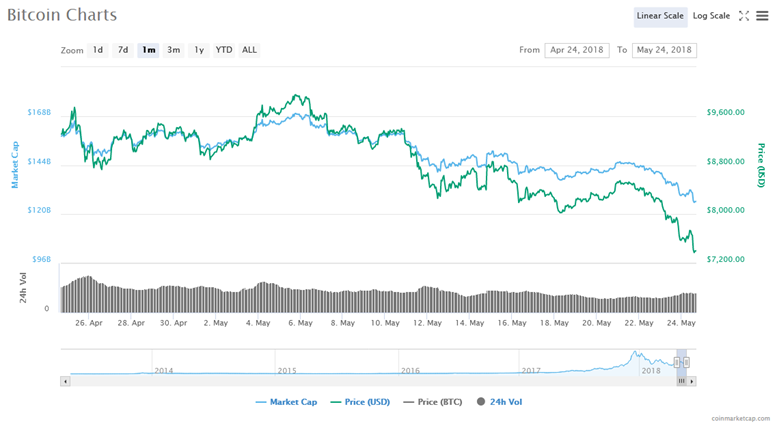 How Low Can it Go?

The bounces were limited in the freefall of Bitcoin Price in the last two weeks. The largest coin has breached several key supports levels without facing any resistance from bulls.

“Last week’s $9k support has turned into this week’s $8k support. And thus far it is giving every indication that $7k will become next week’s support. I hope you see the trend here,” Jani Ziedins said.

Technical analysts, on the other hand, are indicating the bearish trend to extend momentum in the days to come.

The previous two bearish spells had pulled Bitcoin price in the range of $6,000 before bouncing back to $10K range. This time market pundits have set a support level at $7K. If price slid below that level, the next support level would be $6,000 for bitcoin price.

Can it Crash to Zero?

The debate over the Bitcoin’s potential to work as a viable currency has been impacting the value of the entire cryptocurrency market. Although Fed’s officials and other investing experts claim a complete crash of the cryptocurrency market, some other reports are showing the only handful of cryptocurrencies will survive in the future. And, Bitcoin is one among them. Tom Lee still holds his buying rating with the one-year price target of $25K.