On Friday morning, Bitcoin price continued its downward movement from earlier this week, falling below the key support level of $8,200. At one point, BTC/USD was below $8,000; a one-month low. The coin hasn’t been able to break above the key resistance of $8,500 for the past three days. Currently, BTC/USD is trading at around $8,100 as of 12 PM EST.

Despite all the hype surrounding Bitcoin throughout the “Blockchain Week” event held in New York, the cryptocurrency failed to rally as people had hoped. Instead, Bitcoin price even fell below the pivotal $8,000 mark at one point as the conferences wrapped up on Friday. Historically, Bitcoin price tends to rally significantly around this annual event. This year’s conference drew in more than 8,500 attendees, more than triple the 2,700 attendees reported for last year’s event.

The good news is that Bitcoin is on another short-term bullish run, which already took BTC/USD back above $8,000. Now, it’s looking to test a resistance of $8,130. The fact that the coin is below its moving averages means a further bounce up is possible.

On the downside, should a reverse materialize, Bitcoin price could once again drop below $8,000. Once that happens, a new month-low could occur, and we may even see Bitcoin reach $7,500 later on. 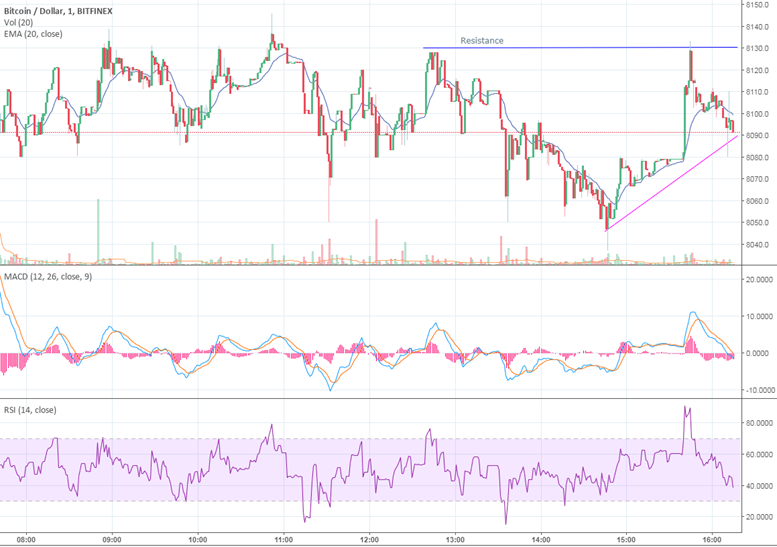 The technicals indicate that Bitcoin is still in bear territory, though the coin is still way oversold. In the short term, a big rally is unlikely to transpire, while another bearish run toward $7,500 could be on the cards.