The emergence of blockchain technology has piqued the interest of a number of different sectors across global society. From finance, politics, economics, automotive and technology, blockchain is starting to take root. It is now being seen that communications could be the latest sector to benefit from this technological revolution.

There has been a predictive report that came out on July 11 from Marketwatch that is suggesting that blockchain technology will contribute as much as $1 billion to the telecommunications sector in the next five years.

When delving deeper into the growth that is already being seen by the telecommunications sector thanks to blockchain — as well as the move toward things like blockchain-powered phones — it is actually an unsurprising number.

If something like the automotive industry is already experimenting and discovering new use cases for blockchain technology — from blockchain DApps for Porsche, cobalt ledgers for BMW and safe-driving reward programs for Mercedes — then it should be expected that phones would soon follow suit.

Phone manufacturers are constantly on the cutting edge of innovation and technology. This is evident in the yearly releases of bigger and better iPhones and Samsung phones — for example, as these two giants of the space always look to one up each other.

But, there are now phone manufacturers that are trying to leave the competitive battle behind and start a new blockchain-based battle, which will see companies creating phones that are purposefully built for cryptocurrency enthusiasts.

However, it is not only the hardware — i.e., the phones — that will have a touch of cryptocurrency about them, the manner in which business is being conducted by these new blockchain communications industry leaders will also be familiar.

Sirin labs is a Swiss-based smartphone developer which has a project in the works that will see a blockchain-based phone come to market in November of this year. The funding for such a project has come from an ICO.

Sirin managed to raise $157.8 million in their ICO, with the majority of that — $110 million — coming in the first 24 hours. This shows there is quite a keen interest in this project and the potential it holds going forward for phone manufacturers.

What makes this blockchain phone different from regular phones is that, although it will be Android, it will run on the Sirin OS and include a cold storage cryptocurrency wallet, a token conversion service and a DApp store for blockchain-based apps.

However, the phone can only be purchased using Sirin’s crypto token (based on the ERC-20 token), and 40 percent of the 573 million total tokens it created during the recent ICO have already been sold.

Sirin is not the only company forging the way for a blockchain-based phone. HTC, the well-known Taiwanese consumer electronics company, is also looking at putting out a blockchain-powered phone.

HTC call their offering the HTC Exodus, according to Phil Chen, who is responsible for all blockchain and cryptocurrency-related initiatives at HTC, including Exodus.

“We are excited to be supporting underlying protocols such as Bitcoin, Lightning Networks, Ethereum, Dfinity, and more,” said Chen on the integration of blockchain applications with the phone’s hardware.

Like the Sirin Labs phone, the Exodus will reportedly feature universal cryptocurrency wallets as well as a secure hardware enclave.

Huawei to enter the scene also

With HTC building their phone, and Sirin just a few months from releasing theirs, even Huawei is making their first steps toward a blockchain-based phone.

Again, looking to build a phone that will be able to support DApps, Huawei is allegedly seeking the license for the open-source operating system Sirin OS. This report comes from an unconfirmed source, but is not outside the realm of imagination when looking at the way in which the space is building momentum.

It is not just phone companies directly who are looking to make the move into blockchain, but rather the entire telecommunications industry. While HTC and Sirin work on delivering their blockchain phones, the Opera web browser recently launched a built-in cryptocurrency wallet.

But even before the launch of a native blockchain product, the web browser was aware of the blockchain space and its challenges and promises when it included anti-crypto jacking software back in January.

In January, IBM wrote a blog post about how blockchain can help the telecommunications business, identifying its ability to streamline internal processes, build blockchain-based digital services, and provide trust, security and transparency in business ecosystems, including the IoT:

“Blockchain is currently one of the most talked-about technologies. Across industries, organizations are exploring blockchain’s potential impact in their space and how they can benefit from this emerging technology. The communications service provider (CSP) industry is no exception.”

IBM even went so far as to conduct a survey of 174 C-suite executives from the telecommunications industry and found that 36 percent of communications service-providing organizations are already considering or actively engaged with blockchains.

Other findings from the survey, which show where the executives have identified the potential for blockchain in their sectors, demonstrates a strong affiliation with transparency, trust and accuracy. 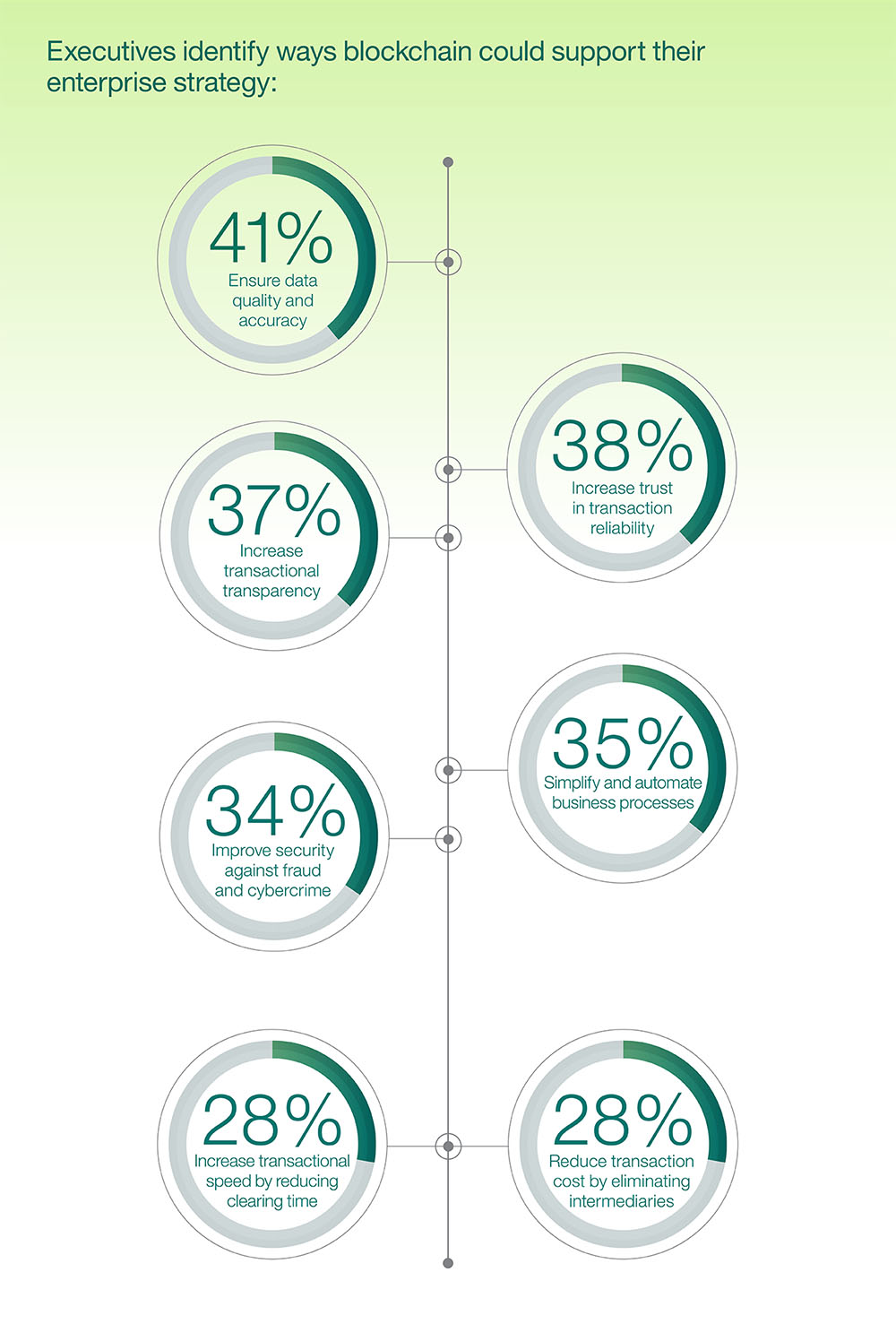 41 percent of the executives believed that blockchain could support their enterprise strategy by ensuring data control and accuracy, while 38 percent believed it would be good for increased trust in transaction reliability.

Furthermore, 34 percent identified its potential to improve security against fraud and cybercrime, while 28 percent of them said it would reduce transaction cost and increase transaction speed.

The time to enter the market

If the MarketWatch report is correct, and blockchain technology in telecoms will explode from a $46.6 million industry in 2018 to one worth $993.8 million by 2023, then it would appear this is a good starting point for many companies.

The space is changing for telecommunications. Security concerns are rising — says the 132-page report — as well as the increasing support for OSS/BSS (operations support systems/ business support systems) processes.

There is a clear shift in the telecommunications sector that can be addressed with this burgeoning technology. But, as it is still a young technology, there are a lot of kinks that need to be worked out. However, being at the forefront with blockchain phones and implementing blockchains to help with security behind the scenes, a number of companies can become leaders in the space. as it moves beyond the likes of Apple and Samsung.