In 2017, cryptocurrencies were thrust into the faces of millions like never before, as Bitcoin and numerous altcoins soared to breathtaking highs.

What followed can only be described as a media frenzy, as any noteworthy publication, website and media agency had some sort of coverage of Bitcoin and crypto toward the end of the year.

Most businesses wouldn’t have enough money to pay for this much advertising — but that is largely due to the fact that Bitcoin and its brethren cruised to all time highs that may not be reached again for years to come.

Nevertheless, over the past few years, crypto has received a star-studded boost from a number of notable celebrities from around the world. From actors to singers, rappers to sports people, a number of the world’s most recognizable faces have lent their voices to numerous cryptocurrency projects.

Some are deeply involved, while others seem to have taken the usual celebrity-endorsement route. Nevertheless, with millions of loyal fans around the world and an equal number of followers across multiple social media platforms, these celebrities can have a big influence over the perception of millions of people.

Given the diverse backgrounds and spaces in which they work, the celebrities also have the power to introduce cryptocurrencies to a wide variety of people, who otherwise may not have been introduced to the technology.

Here’s our list of notable celebrities that have made waves in the cryptocurrency space, as well as those who are just riding that wave for their own benefit.

Snoop Dogg has been in the rap game since 1991, and he’s one of the most recognizable faces of the music industry.

His most recent foray into the cryptocurrency space is as recent as April 2018, when he teamed up with Ripple as a performer for a VIP experience they had in May in New York City.

However, he’s been in tune with the industry since the launch of his 2013 album X, which fans could apparently buy with Bitcoin. What seemed like a tongue-in-cheek Tweet quickly became reality, as the likes of BitPay and Coinbase responded to the Tweet promising to make Snoop’s promise a reality.

My next record available in bitcoin n delivered in a drone.

At the time, Bitcoin was sitting at $1,000, so if Snoop made a load of sales in the cryptocurrency back then and ‘hodl’d’, he may have made a killing in 2017.

Snoop also put out a tongue in cheek reTweet of a Robinhood advertisement promoting the feeless exchange, with the memorable tagline, ‘putting tha Crip in Crypto:

The pop star has over 70 million followers on Instagram, and 107 million on Twitter, bringing a new meaning to the term ‘star power.’

That means a massive number of her fans have seen and or reacted to a couple of crypto-related posts on her profiles.

In January, the American singer posted a picture on Instagram of her nails done up with a number of different cryptocurrency logos, including Bitcoin, Monero, Litecoin and Ethereum.

Back in November 2017, Perry posted another photo on Instagram, sitting alongside American investor Warren Buffett in an interview-style setting, with the caption: ‘nbd just asking Warren Buffett his thoughts on cryptocurrency’:

Considering that Katy Perry has the most followers on Twitter in the world, and is ranked 20th on the list of most followed Instagram profiles. Her positive outlook was definitely a boon to the perception of cryptocurrencies for millions of people.

The American actor is famous for his role in That 70s Show, but he has gone on to make waves in Hollywood over the years.

He’s had a history of crypto interest — starting with a Tweet in 2014 that shared a link to the Ethereum website a full year before the project went live.

With 18 million followers on Twitter and Facebook respectively and nearly three million on Instagram, Kutcher is another crypto enthusiast who has the capability to influence a large audience of followers.

American rapper 50 Cent began his association with cryptocurrency in 2014 by allowing fans to buy his album Animal Ambition using Bitcoin.

Sources claim that 50 Cent made around 700 Bitcoin from his album sales — which is worth around $4.3 million at the current Bitcoin price.

What may have been more of a brain wave for the rapper than anything else was still a positive move for the cryptocurrency world, as 50 Cent has over 19 million followers on Instagram. 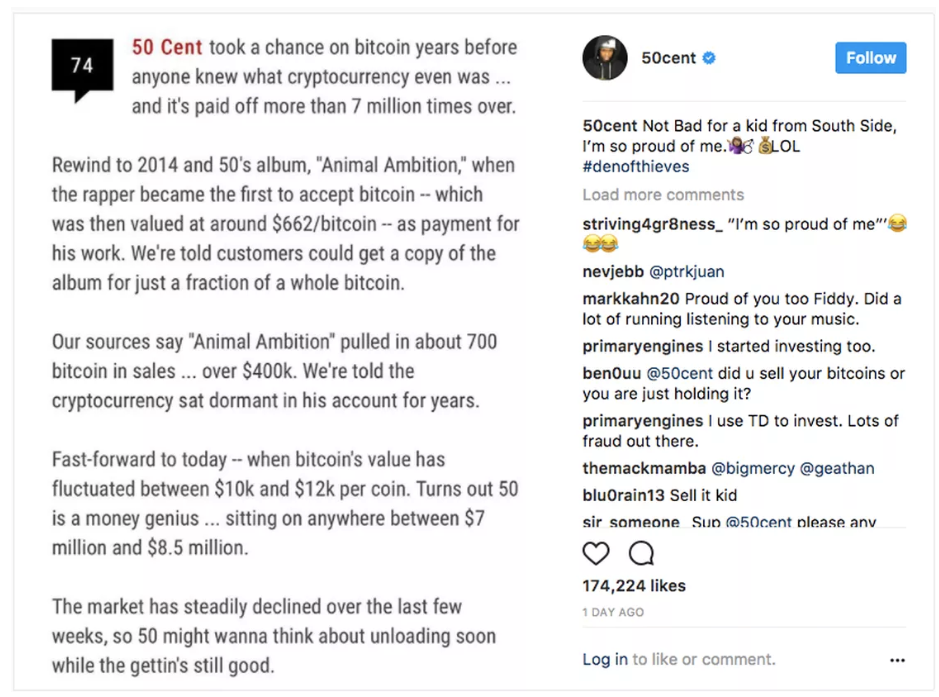 Barcelona and Argentina football star Lionel Messi is one of the most recognizable figures in the world, let alone sport. Messi has an astounding 96 million followers on Instagram and 88 million on Facebook, making him one of the biggest influences around.

Messi is definitely the most notable sportsman involved in the blockchain space. In 2017, Messi announced that he’d become an ambassador for SIRIN LABS.

The company is pioneering the blockchain-powered smartphone space, with its FINNEY model currently in development.

Messi endorsed the project on his Facebook page in a paid post, in a move that was aimed to reach an untapped market of people who may never have been introduced to blockchain tech.

“I am usually busy trying to decentralize defenses and after digging deeper into blockchain and decentralized systems, I’m excited to join SIRIN LABS as an ambassador to make blockchain more friendly with their upcoming operating system for smartphones!”

Renowned boxer Floyd Mayweather has captivated audiences for his exploits in the ring, but there’s a reason he’s known as ‘Money Mayweather.’

While he’s undefeated in all 51 of his professional boxing bouts, Mayweather and his team have been just as aggressive in their business exploits. With a net worth of over $700 million, Mayweather certainly knows how to make money — and part of that is knowing what projects to be associated with.

However, all that being said, Mayweather’s endorsement of an Initial Coin Offering didn’t end well for the company behind the project. In September 2017, Mayweather was pictured promoting Centra, a cryptocurrency project that raised over $32 million during its ICO.

Spending bitcoins ethereum and other types of cryptocurrency in Beverly Hill https://t.co/q9VZ3MzpK8 pic.twitter.com/BYyOFUnm8W

Less than six months later, the U.S. Securities and Exchange Commission indicted the three co-founders of the project for securities and wire fraud.

Earlier in 2017, Mayweather had posted pictures on Instagram supporting two different projects. One, Stox.com, is a Bitcoin price prediction platform, while the other is a decentralized marketplace Hubii network.

American actor Jamie Foxx also got in on the cryptocurrency frenzy, promoting the launch of an ICO in September on Twitter.

Andreas Antonopolous cautioned people to be wary of celebrity endorsements of investment opportunities.

“The worst reason to make an investment is a celebrity endorsement. Unfortunately, this tactic works, and that’s why they’re doing it,”

Donald Glover — Not so ‘Childish’ Gambino

Also known as Childish Gambino, American actor and rapper Donald Glover seems to be one of the first celebrities to advocate the use of Bitcoin.

All the way back in 2013, in an interview with Time, Glover expressed his interest in the use of Bitcoin and the possibilities it could bring to the world at large.

“I know a lot of people are skeptical, but I feel like if everything’s going to live online, why not Bitcoins? Being backed by gold seems very old and nostalgic to me. Being backed to a Bitcoin, which takes time to actually make and there’s this equation that has to be done, that feels realer to me and makes more sense.”

It hasn’t all been easy sailing for some celebrities and their cryptocurrency collaborations. A select few who have gotten behind certain projects have ended up with their own brands being damaged by the failures of some of these cryptocurrencies.

As we’ve touched on above, Mayweather was one of these celebrities to have endorsed an ICO that ended up being exposed as a fraud. Centra’s founders have since been arrested and charged — but Mayweather wasn’t the only celebrity to be linked with the ICO.

American music producer DJ Khaled also endorsed the Centra Card, which was advertised as a cryptocurrency debit card that could be used to convert crypto into fiat currencies.

The ICO claimed that card was powered by VISA and Mastercard, but the SEC reported that this was, in fact, false. Khaled has since removed the post from his Instagram account. 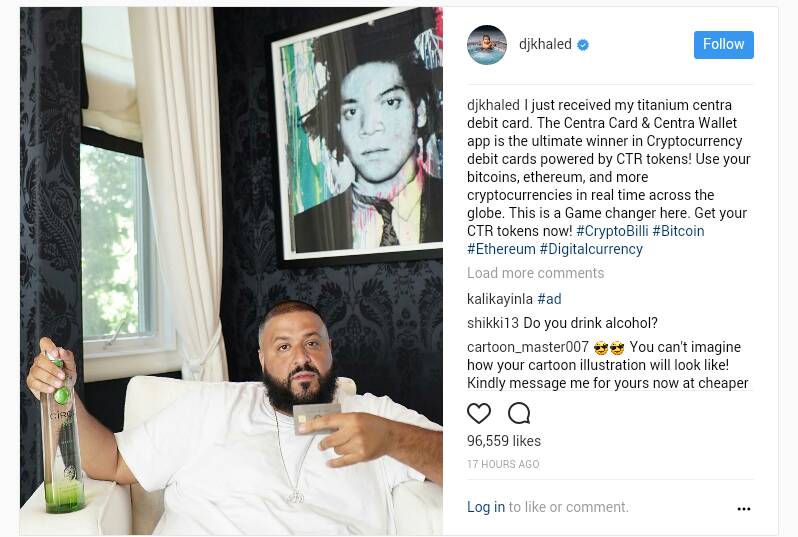 American television personality Paris Hilton was also part of the ICO frenzy in 2017. In a now of now-deleted Twitter posts, Hilton expressed her interest in the ICO of LydianCoin.

A couple of months later, the celebrity distanced herself from the project, after the CEO of LydianCoin’s parent company became involved in serious legal battles.

In November 2017, the SEC warned celebrities that they could face legal ramifications for promoting ICOs without disclosing certain details of their involvement with these projects:

“Any celebrity or other individual who promotes a virtual token or coin that is a security must disclose the nature, scope, and amount of compensation received in exchange for the promotion. A failure to disclose this information is a violation of the anti-touting provisions of the federal securities laws.”

American actor Steven Seagal has been involved in one of the more bizarre cryptocurrency ICOs of 2018. Widely denounced as a ‘pyramid scheme’ or MLM company, Bitcoiin2Gen was launched in January, with Seagal named as a brand ambassador.

The project seemed sketchy at best, and numerous cryptocurrency publications labelled it as a pyramid scheme. The company denied the claims, saying it’s four level, pyramid-scheme-resembling commission structure was only in effect during the ICO.

It was hardly surprising that Seagal and the project’s founders announced that he was parting ways with Bitcoiin2Gen after the conclusion of the ICO in March 2017.

This was just days after the Tennessee Department of Commerce & Insurance (TDCI) Securities Division issued a warning to consumers about the nature of the project — which was deemed to be offering unregistered securities.

American rapper The Game is well known as a marijuana entrepreneur, and his exploits in the industry spilled over to the blockchain space in August 2017.

In a video on Twitter, The Game promoted a blockchain-based platform, promising to bring big changes to the marijuana industry around the world through the use of smart contracts.

Preparing a cannabis revolution with blockchain. @JessVerSteeg and I will tell you more about our upcoming ICO on August 15th @paragoncoin pic.twitter.com/xjGS9qAEF2

Unfortunately, the project followed a similar fate to those mentioned above. According to reports, the founders failed to register the ICO with regulators – leading to a lawsuit from investors.

As the old saying goes, there’s no such thing as bad publicity. This rings true to a certain extent, but celebrities may want to avoid being associated with fraudulent projects that could land them in legal trouble.

The SEC has made it pretty clear that notable figures in the entertainment industry should be wary of promoting or endorsing projects that could fall under the scope of a security.

As the past six months have shown, the cryptocurrency space is still a growing entity, full of good projects and a few bad ones. Onlookers would do well to take celebrity endorsements with a pinch of salt — and do their own research before jumping onto the hyped-up bandwagon.