Cryptocurrency markets staged a modest comeback Friday, July 13, following a week in which Bitcoin (BTC) lost over 5 percent against the dollar and Ethereum (ETH) over 7 percent.

Data from Cointelegraph’s price indices and Coin360 show a rebound from weekly lows of $6,180 for Bitcoin, which had hit highs of $6,792 July 8.

At press time Friday, BTC/USD is trading around $6,250 up just about one percent on the day, this week’s downward momentum failing to crack support around the $6,000 barrier. 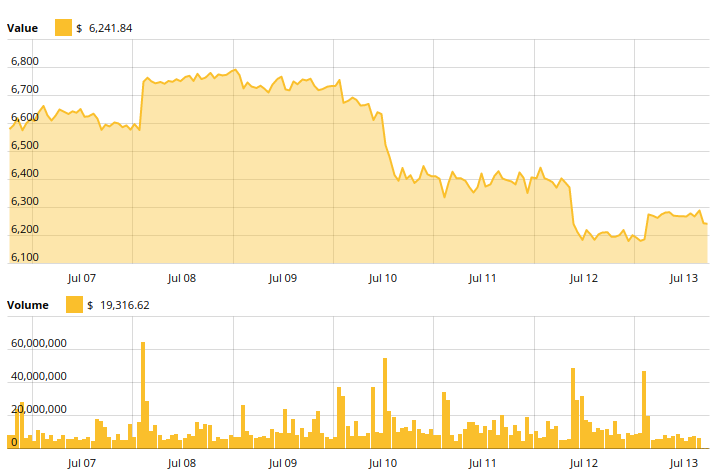 For Ethereum, prices have continued to broadly fluctuate around Bitcoin, Friday’s reversal also seeing about one percent gains against a broader weekly decline around 6.2 percent. At press time, ETH/USD is circling $437. The return to form of the two largest cryptocurrencies has in turn produced copycat behavior from the majority of the top 50 cryptoassets, with most seeing 1-4 percent gains today. EOS rose over 4 percent Friday, while Dash is up a notable 8.4 percent, leading the top 25 coins.

Bancor’s BNT token, which lost around one third of its value this week after its issuer reported a hack, has so far failed to reverse its losses, up a modest 0.8 percent today.

As Cointelegraph continues to report, many commentators from the cryptocurrency industry and beyond continue to hold a bullish stance on prices in the medium term.

A report last month by Chinese exchange Huobi saw the majority of respondents to its survey forecast a “substantial” increase by the end of the year, 71 percent believing markets will expand by over 30 percent of current levels.

TenX’s Julian Hosp went further, this week committing to a Bitcoin price target of $60,000 by the start of 2019.