Microsoft Bought GitHub: Even from a company as technologically advanced as Microsoft, the announcement that it acquired GitHub on the morning of June 4th took a lot of people by surprise. In the past, Bill Gates, founder of Microsoft, has critiqued the crypto sector, which is why many are skeptical of this purchase. It’s not that Microsoft is a bad company, it’s that many are worried about the effect this acquisition will have. Specifically, on virtual currencies like Monero (XMR).

In this article, you will see where this fear originated from.

On Monday, Microsoft announced that it purchased GitHub for $7.5B. Google was also in talks with the company, but ultimately Microsoft bought GitHub.

As we all know, Microsoft is a computer company. Bill Gates founded Microsoft in the 70s, allowing him to become one of the richest men in the world. In 2018, Bill Gates has a net worth of 92.9B. GitHub, on the other hand, is a web hosting service used for computer code. It has a variety of features, such as access control and collaboration, which have made the service a popular choice within the coding world.

Now, Microsoft has made various acquisitions in the past, such as buying LinkedIn for almost $30B in 2016, but Microsoft’s acquisition of GitHub has divided the masses. Why? Well, one of the reasons is because Bill Gates has made skeptical comments about the crypto sector in the past, and many are worried that because of this, he will be making some changes to GitHub in the months to come.

See, Bill Gates has previously stated that Bitcoin is volatile, and that crypto, in general, is a “greater fool theory” type of investment. He said the public shouldn’t expect crypto to go up, because they’re “not producing anything.” Bill Gates has also said that in 2018 crypto is being used to buy fentanyl “and other drugs.”

It’s because of this attitude people fear the future of cryptocurrency Monero (XMR). Monero has called GitHub home for a while, but some fear Bill Gates might get rid of it. Why? They suspect he probably isn’t a fan of Monero (XMR), considering it has been implicated in crypto jacking. Keep in mind Gates has not been Microsoft’s active CEO for years now, but it does seem like Microsoft has taken a similar viewpoint on the industry, banning crypto ads on its platform not too long ago.

On Reddit, a discussion website, hundreds of people are discussing whether Monero (XMR) should leave GitHub or stay. Some say yes, others say no. Meanwhile, a member of the Monero core team came forward, stating that a move to Gitlab is possible. However, the decision will be up to the dev group.

If Monero (XMR) moved, the platform’s stance on the matter would be evident. GitLab is GitHub’s rival, so it would be a bit of a slap in the face to GitHub and Microsoft.

Monero (XMR) seems to be keeping its composure on the market, although that could just be because the entire crypto market is doing well. Either way, XMR is in the green, and we consider that good Monero news. Either way, it’s a little bit of sun on an otherwise cloudy day. 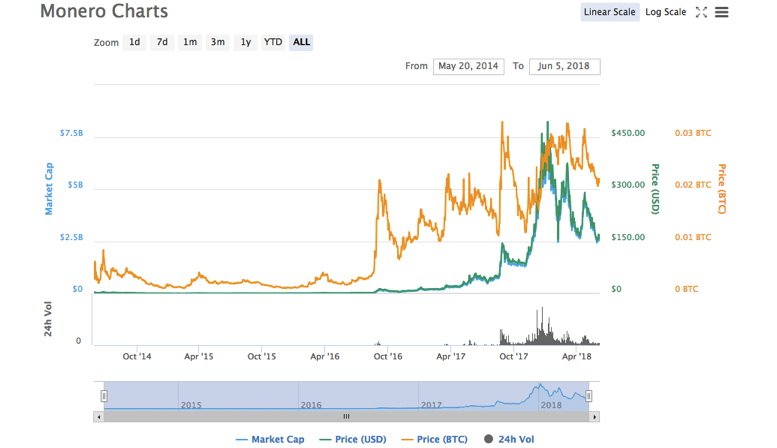 What do you think of Microsoft’s acquisition of GitHub? Is it going to have an effect on Monero (XMR)? Or are people overreacting? Should XMR move to GitLab? Let me know!