A crucial month for cryptocurrency: John McAfee has predicted a 100% Bitcoin price (BTC) growth. Is it turning into reality? John McAfee, the founder of McAfee Software, has recently made a bold claim that Bitcoin price could trade at around the $15,000 mark in June.

John McAfee’s claim was based on market environment and trader’s sentiment instead of technical or fundamentals factors. His price bet was quite awkward at that time because it coincided with Donald Trump’s public refusal to meet with North Korea’s president, and great political meetings in the past had proven to be influential over market prices. 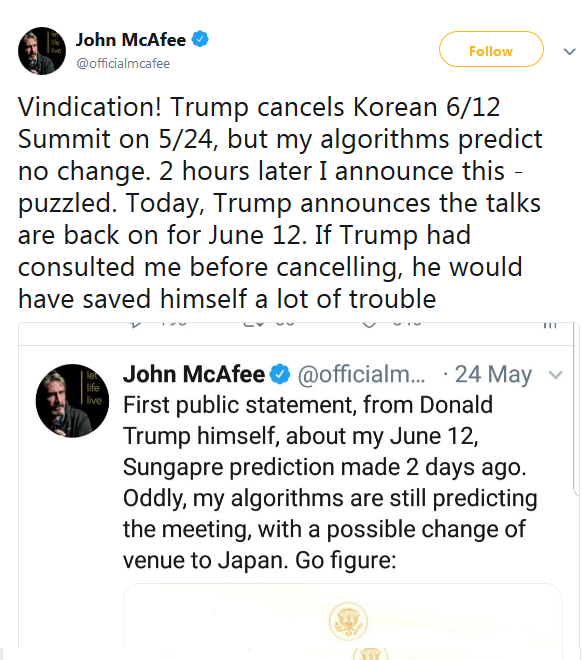 A Crucial Month for Cryptocurrency

However, things changed suddenly in the direction McAfee highlighted in his tweet. Even the U.S. president announced last Friday that the historic meeting between the two counties was back on— officials from both countries arrived in Singapore to check out the logistics of the conference.

The Cryptocurrency market, on the other hand, entered June on a positive note after posting significant losses in May. The market has been paring earlier losses at a steady pace over the last week. Bitcoin price has risen from $7,000 to $7,700, while Altcoins are making notable gains; IOTA (MIOTA), Cardano (ADA) and Bitcoin Cash (BCH) soared close to 20% in the last week alone.

Indeed, technical analysts are now indicating a bullish pattern for the cryptocurrency market, as they believe the market hit its bottom last week.

“We think Bitcoin is starting to bottom off some very key support around $7,000, and we think it’s going to start a recovery process here,” Robert Sluymer, head of technical strategy at Fundstrat Global Advisors, told CNBC.

Is the Market Set for a Huge Recovery? 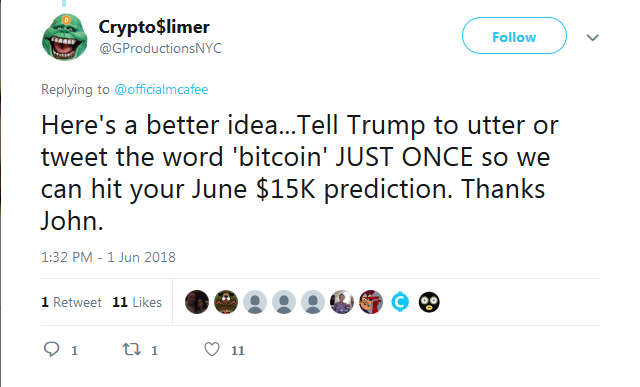 The cryptocurrency markets have been lacking fundamental support for creating substantial price recovery, bears say. They believe that a price recovery of almost 100% only due to Trump’s meeting with the North Korean president is impracticable. Nevertheless, market participants expect some improvement in cryptocurrency markets, driven by the improving geopolitical environment.